Forget about Being Salty in the Salt Pans of Piran

When the hot days of summer finally arrive, everyone dreams of spending their vacation in a quaint town near the coast where they can sip their favorite drinks and swim in crystal clear waters. Nothing beats the idea of relaxing by the seaside and getting some tan. This is the very thing that you can expect to get at Piran, the charming coastal town on the tip of Slovenian Riviera known for its colorful atmosphere, attractive narrow streets, and stunning sunsets.

The Salt Town of Piran

Salt played an important role in the growth of the most gorgeous town on the coast of Slovenia. The salt pans of the town is where the world-class flower of salt or fleur de sel remains produced to this day with the use of ancient methods. These salt pans are the very reason behind the flourishing of this scenic Mediterranean walled town that is also known for its cultural attractions and church that offers an equally wonderful view.

This old port town has remnants of the medieval wall protected as a historical and cultural monument. The narrow streets of closely built houses that descend from a hill and the church in the central square of the coast further highlight the town’s Mediterranean character.

The coastal town that was developed under Venetian influence is regarded as among the most photogenic and most authentic towns on Adriatic coast. Aside from the architecture, an aquarium, the Maritime Museum and many other attractions, the town is also crowded with visitors who want to enjoy its culinary offerings, participate in the events and experience the special natural features near it.

A Town with Historical Legacy

Piran is among Slovenia’s pretty medieval towns. Fans of defensive walls as well as other cultural and architectural features from bygone times can visit and explore Slovenia for an entire week, dropping by one historical town to the next, from the Pannonian Plan to the Alps and from Ljubljana to the coast.

The location of the modern-day Piran used to be a settlement of the Illyrian tribes during the pre-Roman times. However, historians are still in disagreement regarding the true origins of the name of the town. But out of all the different, there is one that sounds the most plausible and that the name was derived from the Greek word pyr that means fire since the peninsula was formerly used as grounds to light fires for guiding ships to Aegida, a nearby settlement.

After a short war with local tribes, the Romans seized most of the northeast Adriatic in 178 BC, steadily colonizing the area until their empire declined during 5th and 6th centuries.

At the start of the withdrawal of the Romans, the Byzantines claimed their power in the area for more than one century before the Franks drove them out, paving way for a wave of Slavs migration to the coast from the interior.

As Venice became more powerful in the north Adriatic, the cities’ inhabitants together with the Dalmatian and Istrian coasts signed political agreements and trade contracts with one another and the Venetians as a means of keeping their independence. But, when 13th century came, Venice decided to completely control the salt pans that surround Piran, prompting them to launch a short but successful war in 1282.

The rule of Venice lasted for more than 500 years and only ended at Napoleon’s hands in 1797. But sadly for the tiny Corsican, the invasions of the Austrians happened shortly thereafter, holding the territory on and off before they got full control in 1813.

Piran enjoyed remarkable growth and prosperity in the next hundred years, with many of the most remarkable administrative buildings of the town dating from this era, such as the town hall and the Tartinijev Trg that used to be the inner harbor.

When World War I came, Italy took control of the entire Istria that neglected the place and led to significant decline in both culture and economy. After World War II, the town of Piran became a part of zone of the Yugoslav military administration and in 1954, it officially became part of Yugoslavia. It was only in 1991 when it gained its independence as a part of the Slovenian Republic. 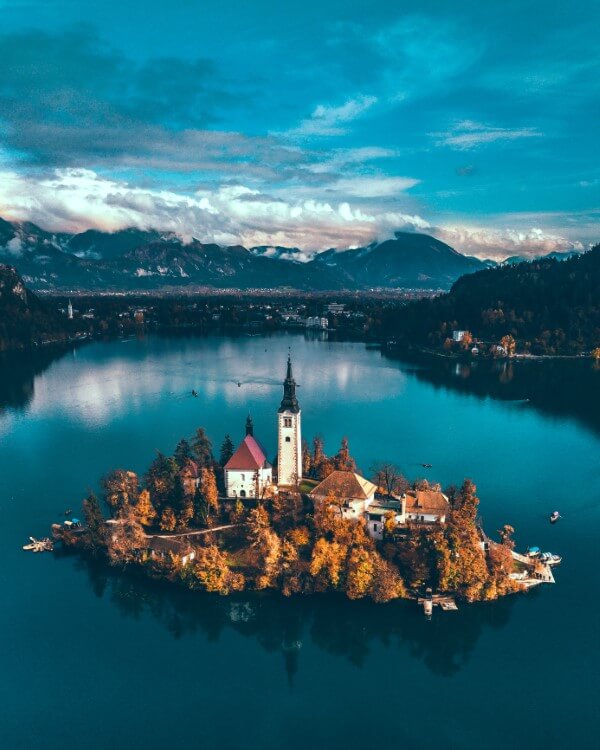 Would you like to see the beautiful Lake Bled with a small island and the church on it? Bled is the town where Lake Bled is located. Click on the link to read the article about this beautiful Slovenian pearl.

Things to See in Piran

There is no doubt that the main square of the town is one of its best attractions. It was named after Giuseppe Tartini, the Italian composer born in this town. Colorful cafes and houses surround the Tartini square with the grand Italian violinist’s statue at the center. People are almost always gathered here since this is a popular scene of most concerts and events.

If you are looking for beautiful views, St. George’s Church and Walls of Piran are some of the sites you should visit as these two both offer stunning and almost endless views over the town as well as the Adriatic Sea. There are also many beaches in the coastal town that are all well-known for their spectacular sceneries and the chance to enjoy a dip in the refreshing water anytime. Piran Beach is the most popular one where you will surely love relaxing under the sun while taking in the view of the renowned Strunjan Cliff and Trieste city in the distance.

Thanks to the size of the city, it is possible for you to experience and visit almost all of its sights in just a day alone. You will be able to learn more about its history and culture as you visit the museums or art galleries dotting the town center.

Enjoy a Unique Vacation in the Town of Salt

A trip to the friendly town by the coast of the Adriatic Sea is one of the best ways to learn more about the interesting history of the coastline of Slovenia while you enjoy some ice cream or a drink in a café overlooking the sea. With the friendly locals and lovely architecture, the town of Piran will surely charm you in more ways than one.

Similar Posts From The Same Category:

Slovenia in the name of Wellness

Bled Attractions That Will Capture Your Heart